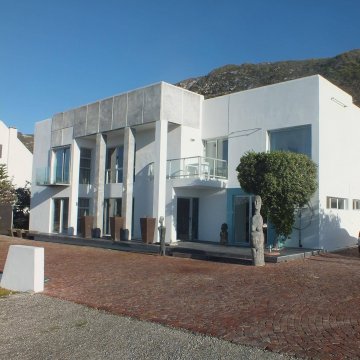 L’Agulhas is the southernmost town in Africa and the closest to the point where the Indian and Atlantic Oceans officially meet.  Early Portuguese seafarers rounding this dangerous cape christened it Golfo de Agulhas (Gulf of Needles).  Later, due to French influence, the name underwent a further change and the town subsequently became known as L’Agulhas.  The name refers to the jagged rocks of the coastline and the fact that a compass needle shows no deviation at this spot between true north and magnetic north.

L’Agulhas gets its rich heritage from the shipwreck survivors of many nationalities who settled in this remote place.

The windswept, ruggedly beautiful Agulhas Plain lays claim to the developing Agulhas National Park, which is host to more than 1,750 botanical species.  The coastline supports a rich marine and intertidal life, with breeding sites of rare birds such as the African Black Oystercatcher, and Southern Right whales can be seen at play in spring and early summer.

The country’s second oldest working lighthouse was built here in 1848 in the Pharos style.  You can browse the fascinating lighthouse museum and curio shop, stop for a cup of tea or a meal, or climb the 71 steps to the top of the Lighthouse.  The koppie (small hill) behind the lighthouse provides a panoramic view of passing ships and the point at which the two oceans meet.  The actual southernmost tip of Africa is marked by a simple cairn situated 1km west of the lighthouse.  East of the tip are visvywers (fish traps) which were created by inhabitants of the area thousands of years ago.  These traps – constructed by building dams across shallow gullies – strand the fish on the outgoing tide.  Some vywers have been maintained through the centuries and are still used today.  The discovery of stone hearths and pottery, together with shell middens, are a valuable historic and cultural legacy left by the Khoikhoi beach nomads, who lived along this coastline for centuries.

The water around the shoreline here is very shallow and Cape Agulhas is known to have one of the best fishing grounds in South Africa.  L’Agulhas also has several hiking trails, and there are also tidal pools and rock pools for swimming.

The small village of Suiderstrand is located just 5kms west of the southern tip, on the Atlantic Ocean side.  Completely surrounded by the Agulhas National Park and the ocean, this village is a nature lover’s paradise.  Coastal walks and hikes through the National Park rewards the visitor with superb views, pristine beaches, pebble bays, rock pools and a unique marine lagoon.

Related content: Where the Indian and Atlantic Oceans meet.