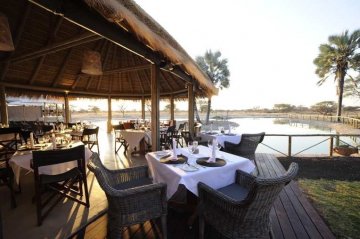 Onguma Game Reserve is one of Namibia’s best kept secrets. Situated on the eastern side of Etosha, bordering Fisher’s pan,  it has so much to offer visitors.

The Reserve covers an area of over 34 000ha and incorporates ecological substrata such as savannah, bushveld, omuramba and dry pan.  Age-old and well-worn migration routes, once used by elephant and buffalo wander through Onguma’s three dry riverbeds.

The Reserve boasts over thirty different animal species.  Plains game roam freely on the Reserve and predators although not easy to spot are nevertheless common residents of the area. Lions are frequently seen and often heard. There is a healthy black rhino and leopard population and hyenas are also often spotted.

More than 300 bird species can be viewed at Onguma. The reserve boasts the biggest breeding colony of white-backed vultures in Namibia. During the summer months Onguma becomes a bird-watchers paradise with thousands of species migrating to wetlands created by the seasonal rains and ephemeral river systems.  This part of Namibia has been identified as one of the key bird watching sites in Southern Africa.

Onguma Reserve boasts 5 unique lodges for guests to choose from, catering to every traveler’s individual needs: