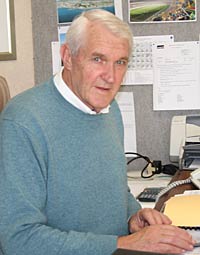 Bev Mitchell is the gentle giant that heads MDA, one of Cape Town’s most experienced firms of project managers.  Without ego or histrionics, he just gets on with managing projects, the fragile egos that are so often involved in those projects and the sometimes near-impossible time frames and budgets set.  He talks about their involvement in the new Cape Town Stadium at Green Point for the 2010 World Cup.

It all started when Rolf Levenhagen, a German entrepreneur who lives in Somerset West approached us with a proposal for a world class sports centre.  They had identified the old Youngsfield airfield in the southern suburbs as an ideal location, but we warned them that it would be a difficult nut to crack because of state ownership.

He introduced us to the German architectural firm of gmp and Hubert Nienhoff, one of the partners, flew out to look at the site.  Within days he came up with a truly spectacular mixed use design.   We brought Louis Karol Architects into the team as the local architect, because they are so good at managing jobs and getting the documentation done.

We tried for more than a year with the authorities but just couldn’t get it right.  Then the City of Cape Town went out with their Request for Proposals for a World Cup stadium so we decided to go with that.  gmp had already been appointed for the new stadium in Port Elizabeth and were pleased with their relationship with BKS, a firm of engineers and project managers, and asked if they could be included in our Cape Town team.

Then Revel Fox & Partners asked us to participate in a stadium bid with them too so Ian Taylor from MDA ran with that as our second team.  But then they pulled out when they questioned the decision to locate the stadium at Green Point.  The other architects who had joined their team – Paul Munnik, Henri Comrie and Henning Rasmuss and Gabs Pather – decided to continue though and so it ended that we put in two bids to the City of Cape Town.

And our bids came first and second when they were adjudicated by the City.  gmp’s stadium design was in the first place but the City’s advisors – David Jack, Alex Robertson and Fabio Todeschini – really liked the second team’s urban design (by Henri Comrie),  and asked the two teams to find a way to work together, so both could be appointed.

And that’s how the team for Green Point came together.   We had the task of welding two teams across all disciplines ending up with in all 19 separate disciplines made up from 51 separate firms.

Time was tight because of the delay in deciding where the stadium should be located and we were starting almost a year behind the other cities building new stadiums.  There was no time for the alternative investigations which are so important at the crucial beginning stage of a project.  And the City’s brief was very loose.

It was difficult to get a handle on costs early on and we asked the four firms of quantity surveyors to second someone with experience on  large stadiums.  Alan Willby from Davis Langdon International was pulled in from London and we used his advice extensively.

In retrospect it’s easy to see how we underestimated – there were time pressures in that there was a finite end date of the World Cup that put pressure on the costs and we were in an international boom time when prices were going through the roof.

National government, the major funder of the project, was also unrealistic when they set escalation allowances for a three-year project.  National Treasury was very negative on every approach made to them – the official we dealt with got the nickname “Dr No” – and maybe we were not strong enough as a team in our dealings with them.

When prices did come in, they were 30% higher than anticipated and the stadium had to be redesigned to reduce costs.

This happened as construction commenced requiring huge resources and immediate information in a minute to midnight scenario.   Further, complications in the subsoil added to foundation costs.

The process of procuring subcontracts, some 85 in total, also brought huge pressures on costs due to scarce resources and high penalties for late delivery.

It took a while to get a handle on total costs and the original budget took a beating.   However, since then, things have settled down and in fact, with the global meltdown, we have seen the original escalation projections being reduced as new indices are published.

However, the end product is now in sight and will be completed on schedule by the end of the year.   The result is a sensational stadium with many outstanding and unique features.   It has taken a huge effort by a team made up of local and international professionals and contractors and will provide Cape Town with an outstanding facility.