It’s hard to miss the big red, open-top double-decker, hop-on hop-off buses that have become a feature of Cape Town and, more recently, Johannesburg. What’s less well-known is the story of Claus Tworeck, the CEO of City Sightseeing.

It’s an inspiring story simply because he’s always just pursued what he enjoys. There’s no arrogance but lots of ‘can-do’ enthusiasm. When I asked for an interview and suggested that I call his PA, he answered “I don’t have a PA. It would be an unnecessary extra member of staff.” 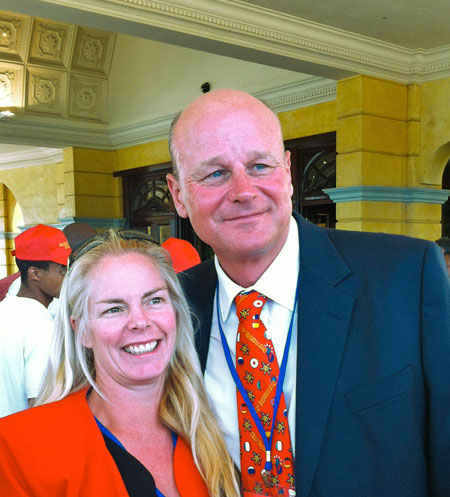 Wendy & Claus TworeckIt all started when he asked his father for money to buy a 50cc motorbike at the age of 16. “Go and work for it and buy it yourself,” was the reply. So he went off and found work at Cape Town station and a few months later bought his motorbike. “How about money for petrol?” was his next question to his father, and got the same answer.

And so he started cleaning buses for Hylton & Janis Ross, who ran Hylton Ross Tours & Travel, and he could afford the petrol for his bike. This was the start of a lifelong love for buses.

After school, he studied industrial engineering at Cape Tech whilst working for Hylton Ross Tours. He worked with the workshop that maintained the buses – “my apprenticeship”, he calls it – until he discovered that the discounts the garage was getting on parts was not being passed on to the company. And he persuaded Janis Ross that they should start doing their own maintenance, and Claus was put in charge of the new workshop which he established, first in Tamboerskloof and then Neptune Street, Paarden Eiland.

He moved up the ladder being put in charge of operations, and then accounts and marketing, gaining insight into the whole business.

Claus heard about someone else “who was setting up business in my city,” – cutting the roofs off double-decker buses. So off he went to meet David Munton who had a workshop at the entrance to the Waterfront. He was invited in and said he wasn’t going to stay long – he’d even left his car’s headlights on to make the point. That meeting lasted from 8:30pm till 3am and resulted in a very dead car battery and a very lively friendship.

In 2002, when Hylton Ross Tours was for sale, David suggested that they buy the business and, after a hard slog with banks, Absa make the effort to understand the business. They raised the required capital from the bank and bought the business. 2002 also saw the first two “Cape Explorer” open-topped buses. Over the next few years, Claus grew the Hylton Ross fleet to 68 vehicles and in 2004, he introduced the City Sightseeing brand which grew in parallel to Hylton Ross.

In 2006 the Cullinan Group approached him expressing interest in the Hylton Ross Tours brand. "So we decided to sell the business.” Cullinan made an offer and it seemed a good fit at the time, and the business was sold. This freed Claus to focus on City Sightseeing.

And he also joined the board of Cape Town Tourism. “I loved that experience,” he says, learning about business structures, transformation, etc.

He had also been watching Johannesburg, believing in its potential and just waiting for the right time. And with Gauteng Tourism Authority wanted the product and Dawn Robertson (GTA) and Rob Collins (then marketing director at TsogoSun) who helped convince me to make it happen. With Tsogo Sun’s big investments to the north and south of Joburg – especially Gold Reef City to the south – they needed better transportation links.

City Sightseeing Joburg has partnered with SO WE TOO, a business started and operated by a young local entrepreneur from Soweto who offers taxi tours through the streets of this vibrant area, visiting five of the top attractions. “Our team yearns to share the real experience of Soweto – the Soweto of today, a vibrant, innovative and forever changing environment that has not been explored to its full potential,” says Kgomotso Pooe. These tours can be booked as an extension of the main Joburg tours.

Claus is passionate about his buses and the company he runs. He can be seen driving buses and attending global conferences. Many of his staff have been with him since he acquired the business. He is visionary and does see the bigger picture of tourism (which includes locals becoming tourists in their own town). What are his “biggies”?

Drivers must be able to drive their routes with a champagne glass of water on the dashboard, without spilling a drop along the way. Our buses must look pristine at all times, with smiles on our team’s faces to match. After all, were not only representing our brand, but also brand Cape Town & Johannesburg and, way more importantly, brand South Africa!

Pushing the quality of the customer experience all the time, Claus doesn’t stop innovating and refers to the use of technology. Their commentary system (developed locally by their “mad professor”) offers 16 languages, is triggered by GPS so it runs automatically, has a digital display and loud enough so no-one struggles to hear everything. It’s been so successful that it is being exported.