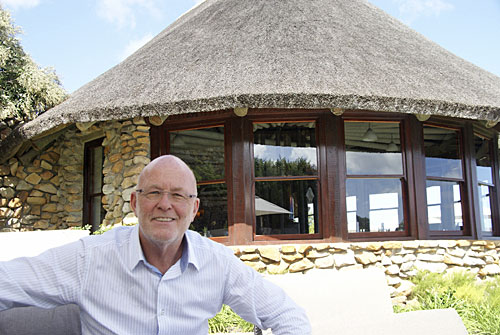 I first visited Grootbos Private Nature Reserve about 12 years ago. It had only started 5 years prior, and I was astounded by the breadth of the vision; much as I had been after meeting Dick Enthoven and his team at Spier Estate a decade earlier.  This is one interview I wanted to do!

Grootbos has gone on to become one of the most lauded destinations in the world – who would have thought a 5 star nature reserve would be named “Best Family Holiday in the World” for example.

From that visit 12 years ago, one off-the-cuff remark by Michael Lutzeyer stayed with me: “This is a view that lets your brain breathe.” He was describing the views from Grootbos – across Walker Bay taking in the three lighthouses of Danger Point, Hangklip and Cape Point. Surely, that’s what one goes on holiday for?

With his noticeable German accent, I was surprised to discover Michael Lutzeyer is South African – he was born in Grahamstown and his father arrived in SA in 1953. Growing up, he always visited farms during holidays and his dream was to own a farm. On a camping holiday to Uilenskraalmond in 1991 he discovered that Grootbos was for sale. The price was R375,000 for 123 hectares and he had to ask his parents and brother Tertius for help to buy it. They visited on the Saturday and bought it the following Wednesday.

Friends told him he would soon tire of it, but Michael visited Grootbos every weekend and in 1994 he sold his machinery importing business and moved from Tamboerskloof in Cape Town to Grootbos to start self-catering cottages. In 1995 his parents retired and also moved there.

“There was no grand vision when we started,” he says, “other than nature being at the core of what we do and the importance of giving back… social responsibility. We never thought it would be where it is today. It was all outside forces and good luck.”

It was after meeting Barry Heydenrych who was working on conservation interventions on the Agulhas Plain that Michael met Shaun Privett, a botanist. Shaun was employed and serious conservation efforts started in 1996 with a comprehensive botanical survey. The aim was to make Grootbos the No 1 fynbos reserve in SA.

And this is when Michael’s father discovered his real love. He had made a name for himself in the printing industry, publishing several books on gardening, but at Grootbos he went out walking for 4-5 hours every day, photographing and coming back with specimens for Shaun to identify. 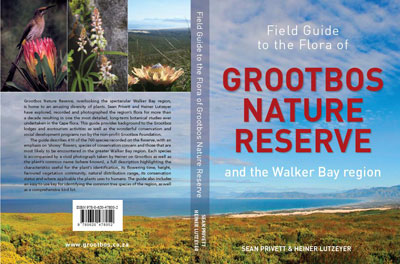 The Grootbos Field Guide, by Sean Privett and Heiner Lutzeyer. Published in 2010.

UCT’s Professor Richard Cowling in a published article estimated that if they continued, he thought they may find as many as 450 species across the enlarged Grootbos property which had grown to 1,700 hectares.

Today, Grootbos has identified 756 species of which 111 are Red Data and 6 are new species for science. And that’s largely due to Heiner Lutzeyer’s efforts. He died in July 2012.

Put in perspective, the entire United Kingdom has 1,550 plant species.

“Fifteen years ago, fynbos was far less known,” Michael recalls, “then when the ANC came into power in 1994 the new gorernment started taxing people on water and waterwise gardens became the buzzword. Kader Asmal started the “Working for Water” initiative and indigenous plants took centre stage.”

So Grootbos started a gardening school in 2003. Now they were doing something for local communities – teaching previously disadvantaged individuals gardening and lifestyle skills. Michael was distracted for a moment and made a quick call to find out about three of his protégés. Grootbos is the largest outreach programme for the Eden Project in the UK (the artificial biomes where plants are collected from all around the world) and three graduates from his gardening school were leaving for the UK that night after resolving their visa issues.

To date, Grootbos has trained 110 gardeners who are skilled with indigenous plants. Michael stresses the importance of the life skills training though. They are also taught to write a CV, use a computer, financial literacy skills, read maps and taught to drive, for example.

The plants they grow are sold, and all of this happens under the Grootbos Foundation, a Section 21 company. With 2004 and the Wold Cup approaching, Michael anticipated the opportunity for potential funders to address poverty. And they started raising funds for a football field to serve the black community. They found land that served all communities and three sportsfields were built. Today, 500 children a week use these facilities for hockey, netball, athletics and soccer.

Children staying at Grootbos are taken to play sport with local kids. What could be better? “This is what tourism of the 21st century is all about – meeting and interacting with different cultures.”

Today the Grootbos Foundation employs 15 people and runs a number of projects. It’s trained a women’s group to grow vegetables while all the pasta, bread and honey used at Grootbos comes from a different group.

Every Friday a group of 20 children take part in a seven week outreach programme which teaches them about the environment. They go a whale boat cruise, Dyer Island cruise, work in the vegetable garden, get taken to the beach and ends with a two-night stay at the fynbos retreat.

Michael says their luck changed in 2003. That’s not true. I first met Michael and Tertius early in 2002 and I could see that what was already underway embraced one of the most exciting visions I’d ever come across. (Gary Player always used to say, “the harder I practice, the luckier I get,” and that’s so applicable here.)

They were receptive to the opportunities and challenges around them. And they grasped those challenges making ripples which spread wider and wider.

Michael repeatedly makes the point, “We have to get involved. We can’t leave everything for government to do. We have to do this for our children if we don’t want them to leave.”

“You have to be receptive to where you are, the time you’re in and the challenges it presents, and you have to be open to opportunities.”

Excluding the Foundation, Grootbos employs 110 people. It has absorbed unskilled people and given them skills. But its impact has been far, far wider.

The Grootbos experience is what separates it from all other destinations. “Grootbos doesn’t do rooms. What does a 5-star hotel really offer?” Michael asks. Apart from all the activites they offer, “SPACE is the ultimate luxury today.”

Well at Grootbos, you’ll have activities to inspire and delight, and space and views that let your brain breathe. 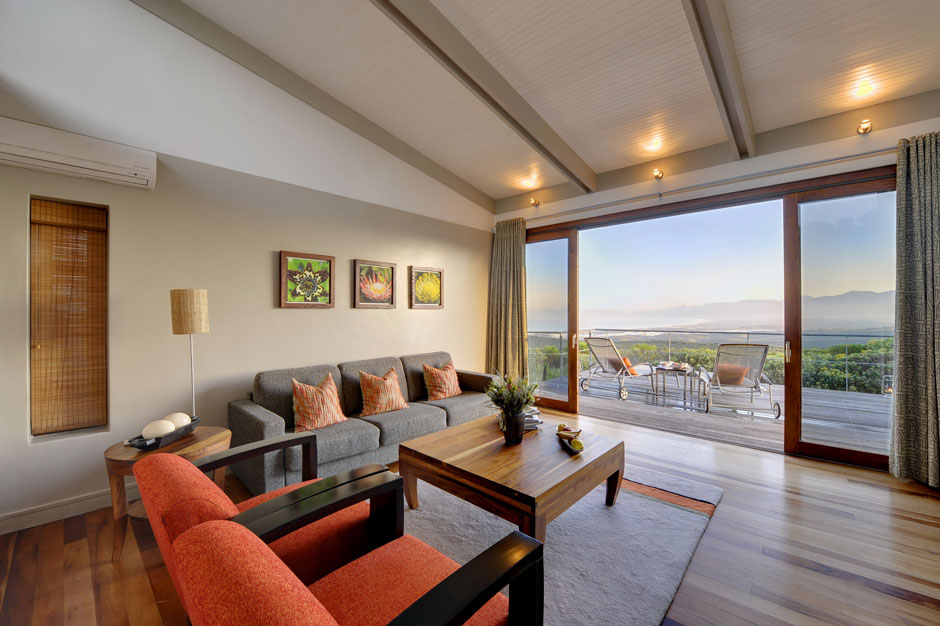 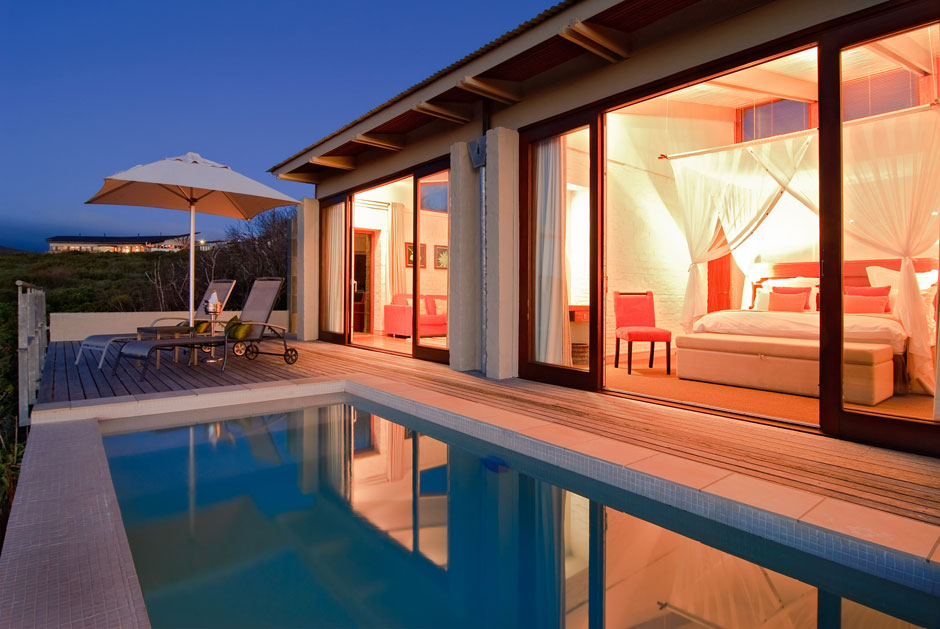