Louis Karol Architects have built a huge chunk of Cape Town -- while you can't miss their work when you look at the Cape Town skyline, they are probably better known for their work at the V&A Waterfront. Here, Louis Karol talks about the new Cape Town Stadium being built for the 2010 FIFA World Cup. 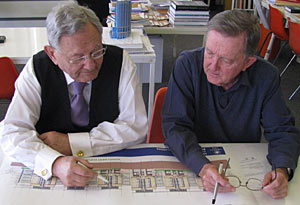 When the City Council put out their RFI for the Green Point Stadium, one of the specific requirements was that whoever pitched for the job had to have an international partner with experience in stadiums. We were approached by the engineering and project management firm of BKS to join GMP, as the local partner to pitch for this job. We won the contract from the City Council but at the last moment they insisted that the consortium who came second be included in our team. We therefore formed Stadium Architects that was composed of as follows:

The Green Point Stadium is a sophisticated design with a highly unusual roof which was designed by a German structural engineering firm. BKS who were the structural engineers for the project and who were responsible for the roof very early on realized that there might neither be the time nor the sophistication of programmes available in South Africa to prepare the working drawings for the roof.

Given time (which was not available for the Green Point Stadium because the project started about a year late due to the discussion as to whether it should be in Athlone or Green Point) I have no doubt that South African firm applying their minds could have come up with a highly acceptable design for a stadium on a unique site such as Green Point. Having said that one’s got to appreciate that the enormous amount of experience that GMP have in stadiums all over the world and especially for the world soccer tournament, and understanding all the requirements demanded by FIFA, it of course made the whole process much easier.

There are always some hiccups in any relationship. But GMP are a highly sophisticated and large architectural firm known for excellent jobs. It was therefore very interesting to work with them and enjoy their technique and ability.

I am of course not a sportsman nor terribly well informed on sports. However, having spent my life of working in Cape Town and especially for the last 20 years being intrically involved in the creation of the Waterfront and understanding the importance of tourism in Cape Town. I therefore did my best and really looked at the stadium as another factor in the infrastructure of tourism for the city. I was successful in having part of the structure amended in order to create for the future a very good hall both for conferences, banquets etc.

From the sustainability point of view, I look at the stadium in a totally different light. I look at it as an additional conference and banqueting centre for Cape Town. It’s positioning is absolutely unique. It is sitting in a park and it is a five minutes walk to the Waterfront with its plethora of excellent hotels, pubs, restaurants etc etc. The stadium will be a very beautiful stadium and will sit in this enormous park and golf course which is being developed in this great lung in the city on the edge and so close to the sea. It will become one of the symbols of Cape Town. It is visible from High level Road and from Ocean View Road and will become an integral part of publicity material for Cape Town.

The whole process was not an easy one. Due to the delay of the project starting a year late and still had to be finished on time. This required enormous resources and excellent management of the whole architectural documentation process. Alan Blair was our partner in charge of the technical aspects of building problems and to have had the breadth of his knowledge and experience in such matters was absolutely invaluable.

It is going to be a great stadium in a great and unique position and will be an additional icon amongst all the wonderful icons that Cape Town already has.