This is the kind of Black Empowerment South Africa needs

Esa Yacoob is a born entrepreneur.  He started his working life as a schoolteacher, teaching children from disadvantaged communities.  And then came the heady days after 1994 when South Africa's democracy dawned and opportunity beckoned.  He was politically active and was exposed to the political world when he offered a home to his second cousin, Ebrahim Rasool, when he was released from jail in 1986.  His home became a focal point for ANC activities.

And then the V&A Waterfront presented one of the biggest opportunities around.  Esa and his family were already in the taxi business and the construction of the V&A Waterfront, with its flood of local and international tourists, became an obvious dreamscape.  Whilst walking around the vast footprint of the Waterfront it struck Esa that they might need a taxi to ferry people around and the concept of a water taxi utilising the waterways was borne.

He started Waterfront Shuttle Services which set him up in the right place at the right time.  Duncan Cloete, V&AW's estate manager at the time, recalls the early meetings when Esa arrived with his team demanding taxi rights at the Waterfront.  Before meetings started, Duncan made them remove their knives and weapons and leave them on the balcony, and then pointed out that demands are never complied with – business plans need to be presented.  "Esa moved forward exceptionally well and became very successful," Duncan recalls.  Esa recalls Duncan saying to him, “We have plans for you…”

One easily forgets those challenging days – there were the taxi wars and then the Pagad shooting and the Planet Hollywood bomb blast at the Waterfront, which was otherwise the most peaceful and safest place in Cape Town. 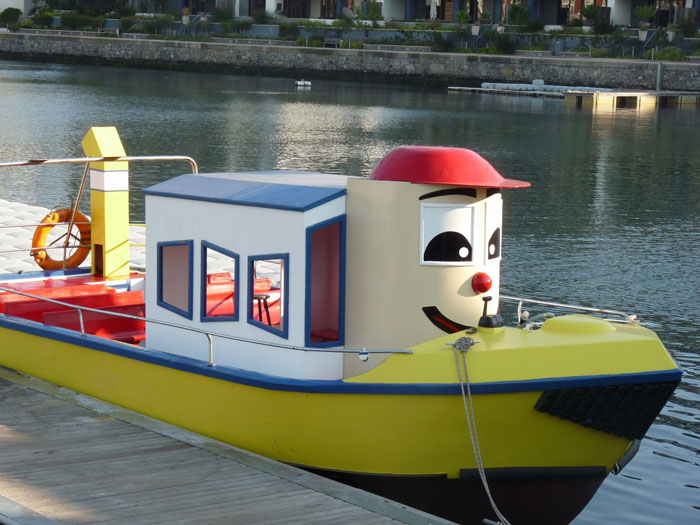 Esa wanted to grow and expand and being the first black-owned business at the Waterfront certainly helped achieve that. Then, one of his first “angels” appeared.  Out of the blue, he obtained R2 million in sponsorship from a most unexpected source – Piet van der Merwe of Teltron.  Together with Fujifilm, Sea Shuttle 1 was built in 1995 and is today known as Tommy the Tugboat.

Esa was now dreaming big and he established Yacoob Tourism in 1996, developing partnerships and joint ventures with established businesses.  He wanted to understand the tourism consumer market, help develop viable tourism products, and play a proactive role in their management and operations while ensuring skills transfer at all levels.

When management of Robben Island was taken over by ex-political prisoners who had been incarcerated on the Island, Esa won a tender to operate the ferry services.  David Abromowitz, a very successful businessman with many boating interests, had been asked to help with the new ferry.  He recalls the time: “I don’t know how Esa became involved – he was the only non-ex-prisoner – but he is the certainly most entrepreneurial person I know.  I don’t always understand what he’s saying because he talks so fast, but he has followed up with one success after another.”

It was around this time that businessman Brian Gutkin told David about the plans to establish Tourvest – a conglomerate of tourism companies.  And he wanted a share in the Robben Island operation as the cherry for the new company’s listing.  David was able to help and, more importantly, introduced Brian to Esa.  And that was the start of a very successful and enduring business relationship.

And this is where he starts talking about the "Scrolls of Life" and how he managed to become – and stay – successful.  He read "The Greatest Salesman in the World" by Og Mandigo ten times and it influenced him enormously.

He makes the point that 90% of black empowerment deals have been failures in the long term.  “The ANC heavyweights moved in early and shares and tenders were arranged,” he says.  “The masses wanted to do business too and were left with the SMMEs,” where entrepreneurship, hard work and strategy counts far more.

He is concerned that a number of the black empowerment deals of the past are not sustainable as they relied heavily on government tenders. Whilst in favour of it, he fears Broad Based Black Economic Empowerment (BBBEEE) does not encourage entrepreneurs.  It does encourage training and skill development of staff into more senior positions and does favour the use of previously disadvantaged suppliers, but it does little to stimulate the development of individual entrepreneurs.

“On the other hand, white businesses wouldn’t take us seriously unless we looked like new money. And we were insecure and arrogant; we were scared and needed confidence.  I had to wear a tie for ten tears!”

He stresses that while he was raised in a system that taught him to hate white people, his exposure to a number of mentors including Eric de Jager and former partners Jillian Grindley-Ferris and Labeeqah Schuurman, exposed him to a new way in thinking.  He learned to value the insights, fears and opinions of others and the strengths of developing and nurturing partnerships with people from all walks of life.

Esa says it was Tourvest’s retail director, Eric de Jager – who became his mentor and business partner – who told him, “You want to learn my skills… but you hate me!”  Tourvest had just acquired a share of the Robben Island Ferry Operation and, says Eric, “it was understandable at the time.  He was under pressure and here were some whites buying a share in a company he had worked very hard at.  He was antagonistic so I told him – we’re not your enemy, work with me, hating me won’t achieve anything.

“But I had to prove to him that I meant what I said.  Money isn’t everything; it’s how you treat people that counts, which generates loyalty and respect, and makes them go the extra yard for you.

“Esa is not the kind of person who can work for someone else.  He has to find his own way.  If I have to find words to describe him, I’d use passionate, charismatic, open to ideas, ambitious, streetwise and driven.  He is good at positioning himself and has unusual skills.

“Esa and I built a very solid relationship.  He is very loyal.  I have a lot of respect for him.

Esa has opened several businesses at the Waterfront over the last 20 years.  Some were closed to adapt to changing times and others grew into bigger things.

V&A Waterfront Shuttles CC operated from 1994 to 2013.  When the city council wanted to create a better transport system for Cape Town, it formed a joint venture with minibus operators to establish the hugely successful MyCiti bus service.  Esa sold his six permits to the City for R1.2 million and reinvested 40% in the city’s bus service.

Robben Island Ferry Services operated from 1997 to 2004 with the tender for the ferry service to Robben Island and was followed by Nonkulelo Charters, which Esa says is currently the largest charter boat service in South Africa.

Esa Yacoob is a “greenfields” entrepreneur – he has started new businesses from scratch and created jobs which have never been there before.  He has grown people and their skills; he has provided new opportunities.  South Africa needs more people like him.