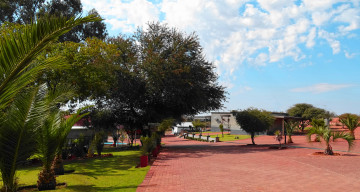 Eden Chalets consists of five self-catering chalets and three separate rooms, each with its own shower/bath, toilet, and washbasin. All chalets are equipped with either built-in or portable barbecues. The chalets have a clear view of both the awesome Auas mountain range and a game camp with various game species. Centrally situated between the chalets, a pool and a Lapa with built-in barbecue render a perfect place to relax and enjoy the great view of the duck pond, Seeis River and Kapp’s dam. The chalets are surrounded by a lush green lawn with huge trees as well as smaller palms and other indigenous flora. Our latest addition to an already outstanding establishment is a high-quality venue hall, with kitchen facilities and a fully licensed bar, that can accommodate up to 250 people for any conceivable function, in breathtaking surroundings. These amenities, along with services such as free wifi, make for top-class conferencing facilities.

Eden Chalets boasts Namibia's largest collection of exotic parrots from across the globe, that can be viewed and photographed at leisure and in your own time. The same applies to our enchanting alpacas imported from Chile/Argentina, and our large variety of other feathered friends – ducks, geese, turkeys, peacocks, game fowl, etc. Ground squirrels, mongoose, and other indigenous fauna and exotic game roam freely in the vicinity of the chalets, and wild birds abound in the area. Eden Chalets is well stocked with an abundance of game – over 20 species, ranging from the magnificent sable to the tiny steenbok – that can be viewed and photographed at close range during our game drives, which are undertaken early morning or late afternoon when the breathtaking beauty of nature at its best can be savored. This is a photographer's dream! On each game drive, we have at least one stopover presenting a magnificent view of the Auas mountain range. During afternoon drives you will also be treated to a beautiful Namibian sunset.