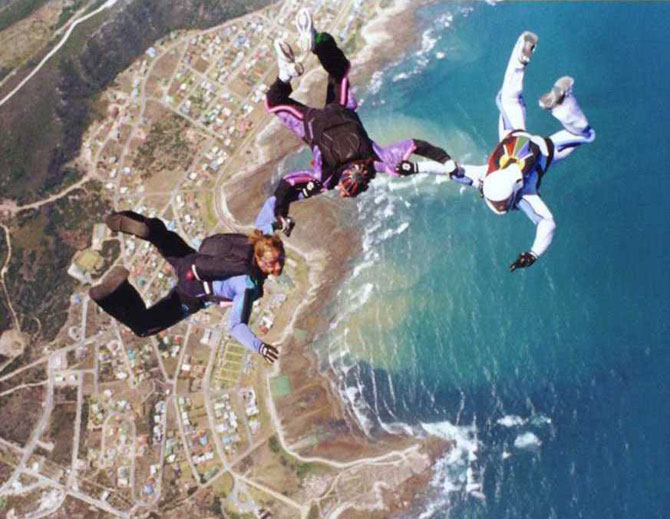 The RAF's Red Falcons jumped over Cape Agulhas - the small peninsula at the bottom of the photograph. The oceans don't respect any lines that are drawn by man...

Yes, somebody did draw a line — to demarcate where the Indian and Atlantic Oceans meet.  The International Hydrographic Organisation, in fact, which describes the western boundary of the Indian Ocean as follows:

From the coast of the Antarctic continent northwards, along the meridian of 20°E to Cape Agulhas (34°50’S – 20°00’E), the southern extremity of the Republic of South Africa, in Africa (the common limit with the South Atlantic Ocean).

So those who travel to Cape Point, or the Cape of Good Hope, in the hope of seeing the confluence of two oceans... you need to travel a little further south. And for those who still try to pursue the debate for commercial reasons, the Hydrographic Office of the South African Navy accepts the findings of the IHO regarding the common boundary of the Atlantic and Indian Oceans and that they apply these findings in full in their products.  The Department of Oceanography at the University of Cape Town also accepts and applies the 20°E dividing line.

The most common misunderstanding behind the controversy is the erroneous assumption that oceans and currents are synonymous. 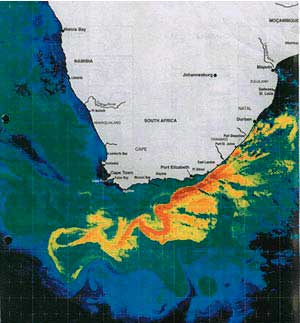 The Agulhas Current brings warm water from the subtropics down the East Coast of South Africa.  From the region of East London, because of the widening of the continental shelf, the current flows further offshore and the coastal waters become cooler.  On the West Coast, the water is chilled by the north-drifting, cold Benguela Current.  When the wind blows the surface waters offshore, deep water, which is rich in nutrients, swells up to replace it.

The changes in temperature along the coast bring about changes in marine life.  One obvious example, which is there for all to see, is the prolific kelp (Ecklonia maxima) forests which prefer the colder, nutrient rich waters of the West Coast.  It is significant to note that the kelp grows all the way from the West Coast, past Cape Point in an easterly direction, only as far as Cape Agulhas.  It can therefore be safely assumed, and can be borne out by physical tests, that the water to the west of Cape Agulhas is predominantly colder than to the east.  This fact supports the argument that the dividing line between the warm and cold waters is more often at Cape Agulhas than anywhere else. 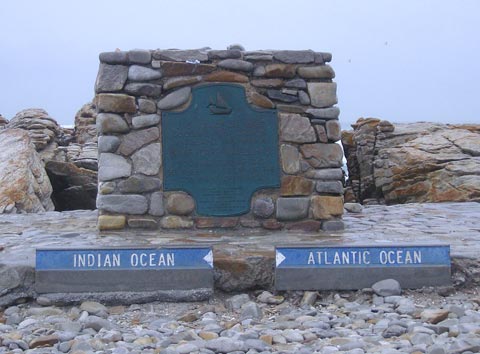 The satellite photograph (above) from the book Two Oceans: A guide to the marine life of Southern Africa by GM Branch, CL Griffiths, ML Branch and LE Beckley (David Philip Publishers, Claremont, 1994) clearly shows the position of the warm and cold waters.  However, because of the effect of the south-easterly and north-westerly winds the warm current can on occasion drift even as far as Cape Point.  The warmer temperature of the water in False Bay is due to the fact that it is not affected by the currents to the same extent as the waters to the east.

To read about the town of L'Agulhas, click here.