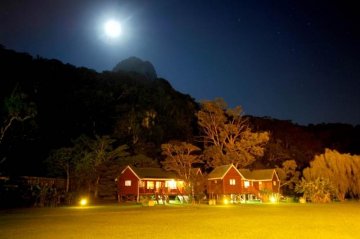 Cremorne riverside holiday resort lies on the banks of the mighty Umzimvubu River.

We have a wide range of accommodation available, from B&B, comfortable self catering cottages, fishermans cottages as well as camping and caravan sites.

There is a wide range of facilities available to entertain the whole family, from fishing to scuba diving, conference facilities and a jungle gym for the kids.

Whether you are staying with us, staying elsewhere or are one of the locals we sincerely hope you enjoy a meal here.

The Captains Cabin is named in honour of the founder of \Cremorne", Captain Sydney Turner who died here on September 15th 1901 and whose gravesite is on the grounds below the pool deck.

Sidney Turner immigrated to South Africa from Norfolk on the east coast of England as a 16 year old in 1864. He led a checkered and exciting life of adventure and enterprise. Some of his exploits include farming, fishing, prospecting, storekeeping and transport riding. He has the distinction of being the first man to attempt salvaging one of South Africa's most famous wrecks, the East Indiaman "Grosvenor" which sank on the 4 August 1782 at Lambasi Bay 50km north of Port St Johns, from which he recovered many coins and cannons.

This property was purchased in 1995 and a couple of years were spent rebuilding and restoring it to the "Cremorne" you are now experiencing. We would appreciate any input that you may have which will assist us to achieve our aim of producing the highest quality of service and hospitality at this unique and wonderful destination.

Where does the name come from?

It is a question that we have been asked on so many occasions but up until early 2002 we had no idea other than it was named Cremorne by the above mentioned captain Sidney Turner who came to South Africa in 1864 and is buried in the grounds of Cremorne.

Thanks to Clive and Edith Dennison of Pietermaritzburg the mystery has now been solved. This is an excerpt from a historical book sent to us by Clive and Edith.

In the 18th century there had been a number of public gardens in London where people went to amuse themselves in the afternoons and evenings. Vauxhall and Ranleigh were the most famous, but gradually their popularity declined until in 1850 only two were left, Royal Cremorne at Chelsea and Rosherville Gardens at Gravesend, by an early slogan known as The Place to Spend a Happy Day. All sorts of displays were given there were fireworks, military tournaments, balloon ascents, dancing marionettes and a host of other amusements.

Cremorne had originally been the private garden of Lord Cremornes riverside house and right up to the end it was a pleasant rural looking place full of green lawns, trees and flowers, but in time it became extremely rowdy, quieter people were afraid to go there because of the noise and vulgarity of the crowds and there were constant complains from local residents about the nightly uproar and disturbances. As a result, partly because of these complaints and partly because of a shocking accident in 1874 when a balloonist was killed, Royal Cremorne was closed in 1877. Today no traces of the original gardens remain, and the area is covered by houses and streets and is now know as Chelsea. The only remaining evidence are a few streets bearing the name Cremorne