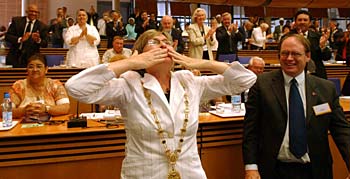 Helen Zille is not what we expected.

She had the reputation as a go-getting, demanding and respected provincial minister of education.  When police didn't appear at a school when called out, she went to the police station to find out why... and found them watching The Bold & The Beautiful on TV.  Teachers who arrived at school late would find her waiting for them.

Since her election as mayor of Cape Town in March, headlines have been been filled with how Zille "puts stadium plans on ice", "purges staff" and the anger from Western Cape Provincial Government (WCPG) and national government.  Some media reports have not been accurate and at least one report was written on hearsay.

Yes, we did find a steely resolve to do the right thing, but we also found her much quieter and warmer than expected.  She's quite comfortable saying "I don't know, I need to learn more," then seeking out other opinions.

A Baptism of Fire

As soon as she arrived in the mayor's office, she had to deal with the collapsing Emergency Services branch.  At the first meeting of the new mayoral committee (which meets in public, unlike the secrecy of her predecessor), Zille says that after the agenda was completed, staff asked for a presentation on the Green Point stadium because contracts needed to be signed immediately.  "We were presented with three figures – the stadium cost is R1.5 billion; national government's contribution is R500 million; the City pays R1 billion."

"There was no business model or financial viability so I asked that we postpone decisions for a week until we see some figures.  I still haven't seen any figures."  WCPG, national government and the 2010 Local Organising Committee were very upset and a round table meeting was held.  The planning and environmental impact studies are now going ahead.

"Of course we want to host some 2010 Soccer World Cup games, but we must make sure we do it properly," she says.  "Cape Town hosted successful opening games for 1995 Rugby World Cup and 2003 World Cup Cricket.  We need to build on that."  A legal challenge by local residents could delay construction, as could the discovery of archeological sites (as happened in the vicinity).  "We need a second option, we can't have all our eggs in one basket.  Already, the time frame for a new stadium is very tight."

The DA-led multi-party coalition has a slim majority over the ANC and the ID (which has voted with the ANC so far in Cape Town).  A year from now, Zille faces the infamous floor-crossing period when elected representatives can abandon the voters who chose them to join another party.  So she has one year to show that her brand of government works and she's only too aware of how important her success is to the future of the DA.

City's slogan: "this City works for you"

Now that shouldn't be too difficult if she gets Council working.  In the last financial year, the City only spent a reported 63% of it's capital budget.  In the past year, Council's staff numbers dropped by 6.5% while the total salary bill rose 7.9%. One must wonder where that 14.4% or R231 million was spent.

With the Stadium story still raging on, the issue of political purges started.  City manager Wallace Mgoqi knew his future was insecure if Zille was elected mayor because the validity of his extended contract was under question even before the election started.  An interim city manager has been appointed and the outcome of Mgoqi's claims are likely to be resolved by the courts.

Zille started with the restructuring of the Mayor's office, where support staff have been reduced from 27 to 12, saving some R6 million a year.  Was this a political purge?  These advisors and aides were appointed to support the political realm, otherwise advice and aid should have been available from Council's staff of 22 000 people.  Together with Mgoki, these people have more capacity to frustrate the new management team's plans than anyone else.

"I don't mind having vocal ANC members in the top management team if they are competent and get the job done.  But I won't have people who campaign against me, who try to hasten my demise and cannot (or will not) deliver," she says. "The city manager can thwart everything we need to do!"

Answering a question about the stable civil service in the UK which sees political masters come and go, she counters that "in the USA, when a new administration moves in, they bring their top people with them."  It's a compelling argument that certainly suits any politician, but it doesn't address the specialised nature of city management.

And there is so much to be done.  An ANC-appointed former manager told CapeInfo at the end of last year that the City Council is in a melt-down, unable to deliver the services it's tasked to do.  Zille disagrees, "It's not as bad as people say.  There are still many excellent people here who were frustrated by the previous administration.  We have to get the appointment at the top right, we have to reward competence and get a close alignment for our policies."

CapeInfo cannot agree with her.  We believe that the past three administrations have run the City into the ground.  (The last administration was an unfolding catastrophe, conducted in secrecy.)  We believe that Zille is going to need to find people equal to the calibre of the globally-respected department heads that the old City of Cape Town had, to dig the City out of the mess it's in.  Many, many really competent people left the Council in the past six years, not because of new policies (many were aligned to the current administration's party) but because of an unproductive environment and incompetent interference from the top.

In former times, the city engineer and the other department heads held the real power as professionals, although the town clerk (usually from a legal background) was the nominal CEO.  Considerable power was vested in the executive committee (councillors) and Cape Town's exco always had a very strong chairman, usually a businessman, but the department heads really ran the city.  The system worked well for 150 years.

What does the future hold?
We believe Zille was 100% right to ask for a one week postponement of decisions regarding Green Point in the absence of adequate information.  We believe that the Provincial premier and the President's office were 100% wrong for their public criticisms of her (and others who raise concerns).  Cape Town needs a mayor who puts its citizens first.

"There are urgent items that need attention – mainly the invisible items that we take for granted.  Our infrastructure has been surfing on the legacy of the past but we are now growing into the spare capacity.  The water shortage and the electricity outages are fresh in our minds, but our sewerage system needs expenditure of R2 billion!  We have experience of being told to use water or electricity sparingly, imagine being told to flush our toilets less often!"

Zille acknowledges that tourism is Cape Town's most important industry, but says she's not sufficiently up to speed to comment adequately.

Will she be getting the best advice?  Her mayoral committee member responsible for economic affairs and tourism is Wasfie Hassiem (African Muslim Party).  Two emails from CapeInfo to Hassiem remain unanswered.  During his tenure on Cape Town Tourism's board, he is remembered for his opposition to the promotion of "gay tourism".  The City Council has played a subordinate role to WCPG in tourism, a fact many tourism stakeholders are not happy about.

There's little doubt that she will pursue a policy of "Cape Town first" when it comes to assessing how Cape Town Routes Unlimited and Cape Town Tourism spends the significant budget they receive from the Council.

Writing in the Sunday Times, Brendan Boyle says "Without the millstone of the DA's political agenda, Zille would certainly be the best mayor Cape Town has had in decades.  She is focused, committed, fiercely bright and incredibly hard-working."

The DA's political agenda is probably less of a millstone than the mutual antagonism that exists between the DA and ANC, and Zille will have to work with other tiers of ANC government.  The ANC won't want to see a DA-led Cape Town succeed but they will have to be supportive if she gets the Council working (spending full budgets), delivers to the poorest as a priority, and the perrenial taints of corruption attached to previous administrations are a thing of the past.

Political parties now in opposition need to understand how democracy works.  The election is over and the people have spoken.  Rather than still trying to oust Zille, as some politicians are, the focus must move to the real issues of administration.

Her powers are considerable as an executive mayor – the post that was introduced by her predecessor, Nomaindia Mfeketo.  Zille concedes that "jobs like this are lonely.  You have to take the flak because the buck stops here... there is just so much power..."

Now she needs to use that power to come up with the bold vision for Cape Town that policies alone can never achieve.  She needs to demonstrate that she is a mayor that unifies and represents the needs and aspirations of all Capetonians, whatever they voted.