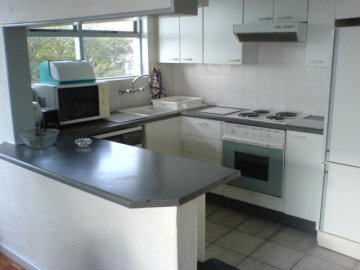 The ever-popular stunning executive Glenlodge Penthouse Apartment in sought-after & upcoming upper Sea Point (3km from Cape Town & the V&A Waterfront) is 6 storeys high on the top floor, north-facing, with 360 degree magnificent panoramic sea & mountain views, in a tranquil upmarket area on the hillside next to Fresnaye, a 5-minute walk to the beach and to CT's biggest modern swimming pool complex on beachfront and a 2-minute walk to shops & restaurants, and the building has a security and intercom system and large garden.

This vibrant suburb of Cape Town, just outside the city centre between Mouille Point and Bantry Bay has more than overcome its former reputation as a crime-ridden part of the mother city. Today Sea Point enjoys a bustling 24-hour cosmopolitan vibe that has drawn a number of city execs to settle in its beachfront high-rises.

Sea Point is divided by Main Road, with its many shops, takeaways, restaurants, clubs and coffee bars. Just about everything you need is found in this part of the city and it hums with activity.