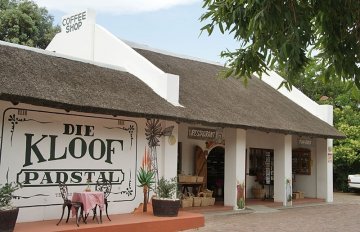 Route 62 Farmstall & Restaurant in Montagu, better known as Die Kloof Padstal, is the first building on your left as you enter Montagu through the Cogmanskloof and for the past ten years the Zilverentant/Bridger family has made this the perfect introduction to the lovely town of Montagu.

The story of the Padstal began somewhere in 1980 when the property was still part of De Bos. At the time the current Padstal area boasted an apricot orchard. The then owner, Mr Jaco le Roux, built a small Farmstall to sell his fruit to the public. He was granted permission by the municipality to sell only his own fruit but was not permitted to buy fruit in from other farmers. After a couple of years he closed the Farmstall and it stood dormant for some years.

In early 1990 the Warnich family started using the building to again sell fruit to the public. Fruit was packed in beer boxes and typically sold at R5 for a box of peaches or apricots. The family used to get up early on Saturday mornings to go out and pick only the best fruit for sale to the public. Petrus Warnich remembers one particular family from Gauteng who used to come via Montagu, to buy apricots for making jam, en-route to their annual holiday at Hartenbos (a detour of about 400 kilometers). The farmstall worked on the “honesty box” principal, where customers selected their fruit and put the required amount of money in the box. There was a note stating that should a customer require change they could walk across the road to the Warnich home. According to Petrus Warnich neither the box nor any fruit or money ever went missing, in fact they still have a number of notes from incredulous customers expressing their surprise at the fact that the shop was operating successfully on such a system.

Sometime during 1993 the Farmstall & the surrounding land was purchased by a Capetonian who planned to build “rondavels” for his workers as a holiday retreat. This however, never materialized, as it was sold to Willem and Christine Cilliers in 1994. They built the existing shop onto the old Farmstall and Die Kloof Padstal was born. The Cilliers sold mainly fresh fruit and vegetables, an assortment of jams, pickles and dried fruit all originating in and around Montagu.

When the Farmstall was sold to the Zilverentant family on 1 September 1999 a small tearoom was added to test the market. With the increasing popularity of Route 62 and after the “chaos” of the 2002 KKNK they had to do something to cater for the growing demand and pretty soon an additional 150 square meters was added. During 2007 a new building was erected to house the Kloof Nursery and the extensions were complete (for the time being). The Farmstall has since become a landmark on Route 62 and is an ideal halfway stop between Cape Town and Oudtshoorn.

This wonderful stopover is popular with travelers and locals alike, for a variety of reasons. The restaurant serves good quality and tasty food at really affordable prices, from scrumptious breakfasts, light lunches and heavenly cakes, while the farmstall offers everything and anything that Montagu has to offer, be it dried fruit, jams, preserves or hand crafted gifts.

The garden is a lovely place to relax with views over the Keisie river and the Bloupunt Mountain and has enough space for kids and tired travelers to stretch their legs. The restaurant is child-friendly with a kiddies menu and offers a lovely play area, which includes a race track, jungle gym, sandpit and even a tree house. Dogs are also welcome and their drinks are on the house!!

Make this your stop for breakfast, lunch or a coffee break. You won’t be disappointed with the quality, service and prices. Taste the Klein Karoo hospitality at its best!!