In Conversation with Derek Hanekom 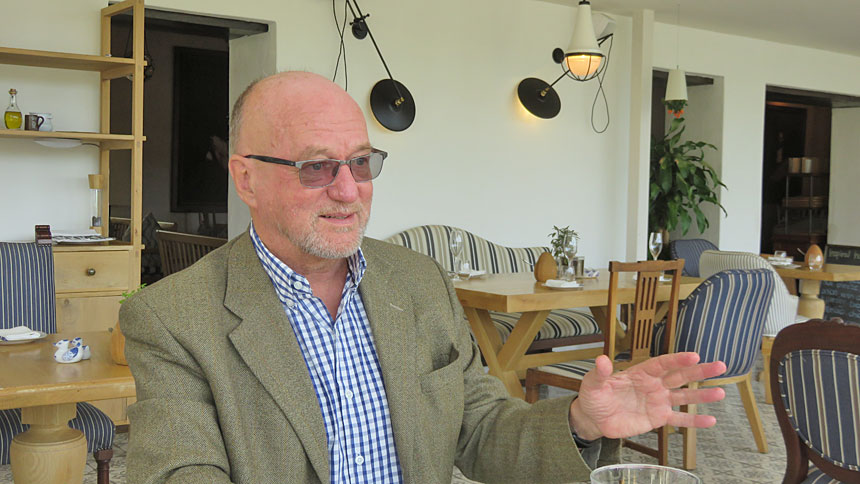 Tourism is not primarily about accommodation, airlines and the like.  It is about people: the bicycle repair shop, the serving staff in restaurants, the petrol pump attendants and the cleaners.  South Africa's Tourism Minister, Derek Hanekom knows this, as he showed when he arrived at Boschendal for our meeting and greeted the cleaning staff first.

Tourism touches so many lives in so many different industry sectors that – if properly managed – it has the ability, on its own, to solve South Africa’s dire challenges with the ratings agencies.  It could generate more economic growth and better jobs that mining ever can.

So shouldn’t Tourism become a Super-Ministry that co-ordinates game-changing plans which create meaningful and upwardly-mobile jobs across many sectors; that improves towns and rural environments; and that engenders national pride?

Please click here to vote and here to add your comments.

I chose the historic Boschendal Estate as the venue for our meeting because, under new ownership, it provides a backdrop of dramatic change.  It is one of the most exciting and progressive farms in SA today, and is making the heritage estate more accessible to all than it's ever been in its 331 year history.

I also invited Elise Tempelhoff from Beeld/Netwerk24 in Johannesburg to join us to bring some diversity to the conversation.  And it was a conversation that I wanted.  Conversations can be continued away from formal meetings.

After the first democratic elections, Derek Hanekom was appointed in the Nelson Mandela cabinet as Minister of Agriculture and Land Affairs (1994-1999).  Then, under Presidents Thabo Mbeki, Kgalema Motlanthe and Jacob Zuma, he was first Deputy Minister and then Minister of Science and Technology (2004-2014).  In May 2014, he was appointed Minister of Tourism.

He is one of the longest-serving members of the cabinet and has a record – in the portfolios he’s handled – of doing a very good job.  Tourism is lucky to have him!

He is an African National Congress insider with strong struggle credentials – in 1978, he and his wife Trish spent three years in prison for the work they did for the ANC during apartheid.  Trish was deported to Zimbabwe on her release and Derek joined her there until they both returned to SA in 1990.

He has been a member of the ANC’s National Executive Committee since 1994, is on the National Working Committee, the chairperson of the National Disciplinary Committee and NEC Convener of the Western Cape.

I found Derek very affable, dedicated and I believe his integrity is beyond question – which his position as the deputy chairperson of the board of the Ahmed Kathrada Foundation must affirm.  He is much sharper than his jocular demeanour would suggest.

The Visa Issue
There was a comprehensive handover in May 2014 by outgoing minister Marthinus van Schalkwyk when Derek took over… but no mention was made of the visa issue.  Derek says the Ministry, the Department of Tourism and the private sector were caught napping.  The new regulations for visas had the best intentions in the world, but the implementation was the problem.  The end of 2014 and the first quarter of 2015 saw a massive drop in inbound tourism, exacerbated by the ebola crisis in central Africa.

If there was a golden lining to these issues, it was the realisation at cabinet level and especially in the ANC working groups of just how important tourism was to SA’s economy.  Tourism is now, for the first time, centre stage… largely due to Derek’s position within the ANC.  "There is recognition of the huge potential and achieving this depends on co-operation," he said.  Marthinus can Schalkwyk could never have achieved this, nor the resolution of the visa issue… he was never part of the ANC’s inner workings.

Protected our assets
Elise raised the conflict between the natural heritage – the real tourism drawcard in the northern provinces – and mining, citing the example of Mapungube, a World Heritage Site, and the mining operation alongside that threatens the water supplies.

Derek made the point that this had never been raised with his Department and that it really is up to the product owners and civil society to flag issues like these.  Could this be, I asked, because tourism structures are so weak outside the Western Cape, where there is a Provincial Tourism Act and strong local organisations?   Derek conceded that this could be fact.  In retrospect, from I’ve seen in Limpopo, Mpumalanga and the Eastern Cape, complaining achieves nothing, apart from being ostracised and ignored.

Derek recalled that while he was Minister of Agriculture & Land Tenure, he saw the modelling exercise that was done for St Lucia which compared the benefits of mining versus tourism for the area.  “It was a no-brainer - if one looks at competitive advantages, tourism comes out ahead of agriculture and maining,” Derek said.  “Tourism instills pride and social cohesion, and provides sustainability.  It offers the greatest value.”

Elise was also interested in Derek’s attitude to canned lion hunting.  He was emphatic that this does damage SA’s reputation and brand, and what I got from this wide-ranging discussion about wildlife was that he is a clever politician who works doggedly at solutions.  The media needs to support him to achieve solutions (and that’s my view, not something he said).

The Departmental Clusters
A few days before our meeting, I realised that I needed to beef up my knowledge about interdepartmental co-operation (something Elise was raising) so I looked at the clustering of departments.  (Click here to see it.)

I was horrified!  Tourism appears near the bottom of the page in the International Co-operation Cluster.  Tourism should have and chair its own cluster, drawing in local government, home affairs, economic development, safety, environmental affairs and even mining.  The current clusters are:

Derek prefaced his comments saying that the introduction of Performance Monitoring & Evaluation in 2014 has seen a big improvement in the way government does things, because it is more accountable.

"While there is criticism of the number of ministries," he said, "almost everybody I've spoken to say how pleased they are that tourism has a dedicated minister."

Many of the issues that arise cannot be addressed in Tourism's cluster and he named some of them: Home Affairs, Environmental Affairs (which controls SANParks - the biggest provider of rooms with 1.5 million visitors), Arts & Culture, Sport & Public Safety.  So they have to have bilateral agreements and ongoing engagement with various Departments outside the cluster.

Derek conceded that more attention needs to be devoted to Local Government, because municipalities are sometimes the weakest link in the tourism offering.

Game-changing Plans for Tourism
We were asked to provide questions before the meeting so that the Minister could be properly briefed.  Here was mine:

The over-arching question I have is: What are national government’s game-changing plans to raise tourism – and its impact on jobs, skills & lifestyles – to a completely different level?  Forget about international arrivals and cross-border visitors for a moment… how are locals going to see the real benefits of tourism and tourism growth?

Some background
Last year I did two very long trips around South Africa, visiting all provinces.  I spoke to many, many people.  All the game-changing stories are at http://capeinfo.com/blogs/beezus/category/gamechanger/.

Tourism will never be Helen Zille’s game-changer until there are lots of changes : My first lesson was that some towns that claim to be tourism towns, are in fact not.  They are getaways or heritage towns, which don’t want the status quo disrupted.  Creating jobs and skills is not the priority.  There is an example here of how business turnover can jump by 100% and quality job creation is boosted by 25% in one step!

Towns & villages need help!  They don’t have the insight, ability or resources.  And you get the crazy nonsenses:  I visited the head of tourism in Buffalo City and she complained that the reason they are not doing well is that SA Tourism doesn’t promote them as much as it promotes Cape Town.  So I asked her to show me Buffalo City on a map, and if there is a Buffalo City airport or post office…

Categorising towns will be the real tourism game-changer!  Not all towns are tourism towns or have even a remote hope of becoming one.  They need to be given goals if they want government and wider support.

And the story that has become almost obligatory reading : How Franschhoek became such a successful tourist town.

So when we started discussing game-changing plans and Derek spoke about the programmes to enhance destinations and the Extended Public Works Programme (EPWP) I just listened and shook my head.  I was flabbergasted.  My limited experience of tourism’s EPWP has been abysmal.  All I could say was “I can’t take you seriously.”

Over lunch, Derek told Boschendal CEO Rob Lundie about the Incentive Schemes the Department was preparing to roll out.  It was mind-numbing.

Is he surrounded by sycophants and fed titbits and comfort food?  The Department of Tourism has no game-changing plans!

From talking to people who deal with the Department of Tourism frequently, I’m told that they work at a grindingly slow pace.  There are no bold visions.

The Department should be dynamic, nimble & responsive, proactive & visionary.  It should be inspired and inspiring.  It’s not.  It needs an overhaul if it is going to play its role in rising to SA’s challenges.

It’s easy to be critical but I’m reminded that his Western Cape counterpart, Alan Winde, faced similar challenges in his first few years as MEC.  He did take some mis-steps in his first two years.  It was only towards the end of his first term that he had assembled all the structures he needed for economic development and tourism to fly.

Alan’s Ministry of Economic Opportunities in the Western Cape is already a Super-Ministry of sorts, embracing Economic Development, Tourism and Agriculture.  His Red Tape Reduction Unit cuts through all provincial departments.

It's pointless establishing a new Tourism Cluster and the national Department of Tourism (DoT) cannot inspire or guide other Departments yet.  That can only happen when the DoT has such a bold and compelling vision and strategy that everybody else wants to buy into it.  And that's something it does not have.

Derek Hanekom is by far the best tourism cheerleader SA has ever had and with 66,000 Twitter followers, he has enormous reach.  With more to inspire us, I'm sure he could pass the top SA politicians (@Julius_S_Malema with 1 118 696 and @helenzille with 965 402 followers) in the social media rankings.  Follow him at @Derek_Hanekom