THE primary purpose of the retreat "farm 215" is the conservation of a unique piece of the Cape Floral Kingdom – it is an important local catchment area, a sanctuary of hundreds of common, rare, endangered and endemic fynbos species and a rare meeting-point of different vegetation-types.  The reserve is a haven for numerous birds and animals.  The guesthouse operations have been made compatible with the surrounding nature and – ever so politely – guests are made sensitive to the importance of safeguarding the integrity of our natural heritage. 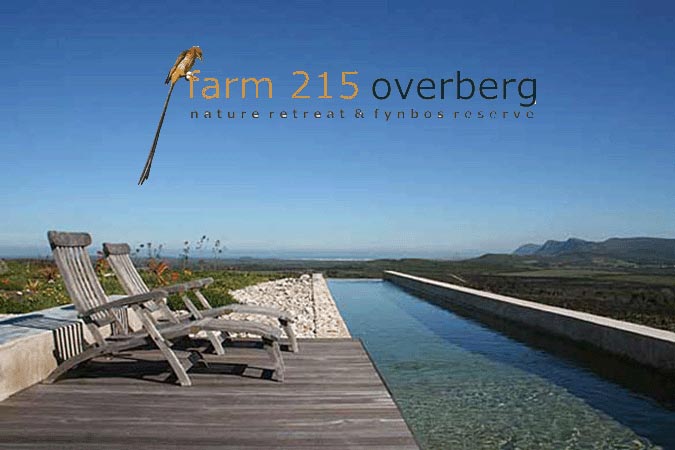 The reserve: The 800 hectare private nature reserve of farm 215 is a rare and unique conservation area in the Cape Floral Kingdom. Common, rare, endangered and endemic fynbos-species crowd the mountain-slopes, wetlands and flats of the reserve.  Ancient remnants of fire-immune Afro-montane forest hide in deep and steep "kloofs" (canyons).

Several fynbos-vegetation-types are represented in the reserve, including the endangered and ultra-endemic Elim-fynbos and vast tracts of Transitional fynbos.  The reserve slopes up to a mountain catchment-area which slowly releases fresh water all year round, naturally filtered by an expanse of restios.  All water in the reserve is safe to drink.  The importance of the reserve is acknowledged by CapeNature authorities who have entered into a conservation agreement with farm 215.  Farm 215 will ultimately be combined with neighbouring properties into a conservancy.

Floral abundance
A full analysis of all plant-species growing in the reserve will take many years and is ongoing.  Over 700 species are represented on farm 215, including 33 species of the protea family, 22 ericas, over 20 orchid species, 15 species of moraea, 11 species of gladiolus, 9 species of watsonia, over 30 so called "red-data species" (vulnerable or endangered).  We have one – as yet – unnamed species of Aloe, which only grows on farm 215 and two neighbouring properties.

Irrespective of the time of the year, there is always an impressive, often breathtaking, display of flowers and foliage.  The first year after the Great Overberg Fire of 2006, geophytes (bulbs) dominated the reserve in shameless riots of colour.

Flying, walking and crawling creatures
Fynbos is not commonly associated with the presence of a substantial number of birds and animals.  However due to the different habitats (kloofs, wetlands, forest, scrub- and scree-land), animals and birds are abundant in the reserve.  A large tribe of baboons regularly spends the night at the foot of a waterfall. Six different antelope-species are resident or regular visitors to the reserve.  Bat-eared fox, genet, honey badger, cape clawless otter and mongoose regularly leave visible traces and we have rare evidence of leopard.

Some birds, from the small Malachite sunbird to the majestic Blue crane, are easy to spot, but patience is required to see the elusive Coogal or the rare Cape eagle owl.  Lizards sneak around on the boardwalks and frogs provide continuous background-noise.

We limit the human impact on the reserve and will only compromise occasionally by re-locating a poisonous snake from the stoep or a frog which has a too noisy nightly performance under the window of a guest-room.

Alien clearing: When the two farms (Koudeberg and Hartebeeskloof), now making up the reserve, were acquired 4 years ago, vast tracts of the mountaineous areas were pristine and hardly infested with alien invasive vegetation.  Parts of the lowlands and kloofs ("canyons") were however taken over by invasive tree-species (Bluegum, Port Jackson, Accacia longifolia, Australian myrtle and European pine).  Alien clearing operations have re-conquered the lower ends of the main kloofs, Hartebeeskloof and Klipspringerkloof as well as a lowland swamp.

As you drive through clean fynbos to the buildings on farm 215, you cannot imagine that – only a few years ago – this was a pine-forest.  After clearing, the kloof, streams were transformed from a narrow trickle to a steady stream in winter which even flows in mid-summer.

Fynbos rehabilitation
Where the seed-banks are still available in newly cleared land, we leave the rehabilitation to nature itself.  In some places the soil has practically become sterile due to years of over-grazing or invasion of alien species.  In these cases, we do scatter appropriate local seed.  In areas vulnerable to erosion we may speed the matter up by planting seedlings.

Reforestation
The reserve of farm 215 is practically at the western-most edge of the Bushbuck Mountain range.  The natural vegetation was partly forest and woodland, much of which has been destroyed in the past centuries.  Appropriate areas cleared from alien vegetation in the reserve are re-forested with indigenous tree-species.  This is a near-impossible task since tree-seedlings need the protection of surrounding forest to develop and a young forest will not be immune to fire.

The first steps are however very promising and we hope to be walking under a 5m high canopy of indigenous forest in twenty years that will be resistant to fynbos-fire in its own right.

Flower plantations
Only 7% of the reserve are established indigenous flower plantations which are harvested annually.  Plants used are local species or sterile cultivars.  Fungicides and herbicides are not used under any circumstances.  Limited wild veld harvesting of selected species is undertaken on the basis of sustainable harvesting techniques as developed by ABI (Agulhas Biodiversity Initiative) and all organic material not required for the final product is cleared and left in the field.

All guesthouse infrastructure is situated in a corridor at the foot of the reserve.  The indigenous vegetation around the buildings is left untouched.  Rings of flowering succulents have however been planted immediately around the buildings which function as natural fire-breaks.  New buildings blend in with the surrounding landscape.

Solar-power and water heating are the dominant source of energy in the new buildings with only back-up water heating for rainy winter days being provided by gas.

Waste water treatment
Only bio-degradable detergents are used.  Waste water is filtered through sand-banks and routed back to the stream that originates in the same mountain-catchment where the guesthouse water is sourced.  No damaging chemicals are used for the cleaning of the 25 m lap-pool. It is filtered by means of sand and salt only.

Waste
Waste is separated and all glass, paper-products, plastic and cans are recycled. Glass, tins, paper and plastic is brought to the little recycling company in Gansbaai.  Organic waste of cutflowers for the guesthouse is dumped in the natural veld (thats where they came from in the first place anyway).  Biodegradable matter is recycled by the poultry. A minimum of rest-waste remains.

Poultry anticipating some nutritious matter – the first stage of the rotting process. Organic waste of edible stuff (not suitable for human consumption) is recycled by the poultry – food for the herbs and vegetables and (of course) into meat.