Sabine Lehmann – A is for Attitude

There were three people I've wanted to interview for a long time.  I interviewed Bulelwa Nakalima-Ngewana (Cape Town Partnership) and Claus Tworeck (City Sightseeing) last year but only managed to catch up with Sabine Lehmann of Table Mountain Aerial Cableway Company now. 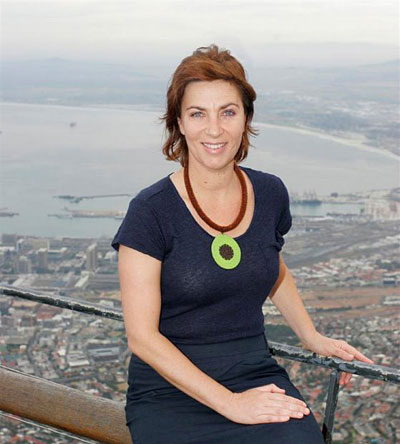 All three are shining examples of the passion and professionalism that has raised Cape Town above most other destinations.  All three are amongst the most admired people in Cape Town.

I’ve had contact with Sabine since she became marketing manager at the Cableway Company in 1998, and general manager shortly after, but we never met till this interview.  She took time out from the Cableway Company to start her own tourism company and complete an MBA at UCT’s Graduate School of Business, before being lured back.  She took over as CEO from John Harrison in 2007.  Sabine was nominated by her peers as the best businesswoman in her field – she received CEO magazine’s 2010 Most Influential Women in Business and Government Award for the tourism and leisure category.

She's busy doing her MPhil (Futures) – a Masters in Futures Studies at Stellenbosch Business School – "basically trying to understand what the future may look like and what we need to do today to achieve our desired future. Naturally I am looking at this through a lens of tourism."

Anyone who follows her on Twitter will remember her tweets for their depth and insight.  I know I've gained a lot from them.

She believes “tourism is about managing a person’s experience without controlling them.”

John had introduced the new cablecars and upgraded facilities in 1997.  His passion was cablecars and the cableway, and he pursued his dream with a vigour that rubbed many people up the wrong way.  But after attending the launch of the new cars, I wrote to him – the new facility was world class and his battle had been worth the effort!

Sabine has brought a new dimension to the Cableway Company.  What illustrates it best was a call I made to the Company one Friday afternoon in 2010, with a very unusual request.  Sabine was out, my usual contact was out and so was Collette van Aswegen, the marketing manager, but the person who answered the phone asked if he could help.  And he did.  In 99.9% of all companies, I would have been told to call back on Monday.  The Cableway Company’s staff is more empowered, hands-on and helpful than anywhere else!  And that's something a number of people have agreed with.

Yes, it ticks all the right boxes for responsible tourism – receiving an Imvelo Award – and it was named SANParks business partner of the year but it’s Sabine’s focus on people that makes the difference.  When I went to meet her, I wondered if her office would have the stunning view up the mountain or the equally stunning view over the city.  Well… her office window looks down onto the arrival area and the queues so she can watch her customers!

“We hire people for their attitude,” she says, “they need self-confidence and be able to engage well with people.  And even the successful applicants for seasonal staff go through a rigorous two-week induction course.”  The Company employs seven managers, 240 peak-season personnel and 150 low-season personnel.  They decided to recruit online for seasonal staff this year.  She was delighted when she saw the videos where department heads explain what they are looking for – without any coaching from her, they all captured the spirit of the Cableway team perfectly.  (Click here for the best example of intelligent recruitment I’ve come across.)

Sabine successfully led the three-year effort to have Table Mountain chosen as one of the New 7 Wonders of Nature in 2012 which has raised the city’s profile considerably.  (While I was in Lausanne in 1997 for Cape Town’s Olympic Bid, I discovered that few locals I spoke to on public transport even recognised the name “Cape Town,” but there was an “Ahh oui” when I said Table Mountain or Mandela.)

She joined the board of Cape Town Tourism in 2008 and was chair from 2012­­­ to 2014, which heralded a period of far greater stability for the organisation.

Looking for a follow-up stint of public service, she started Attractions Africa with the Cableway Company as the lead sponsor – an annual conference for the attractions industry only.  They held their second conference recently and it was a huge success – attractions sharing their challenges and their success stories, and learning from each other.  I wish I’d been there!  The International Association of Amusement Parks and Attractions (IAAPA) has recognised their efforts.  Every continent was represented on IAAPA – bar Africa – but that has changed and Attractions Africa is now officially part of the international body.