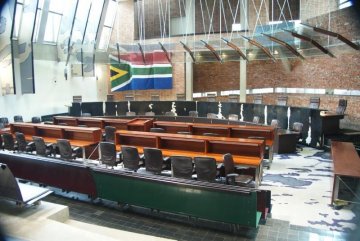 The first court session in the new building was held in February 2004.

The hill was the site of a fort which was later used as a prison which was built to house white male prisoners in 1892. The Old Fort was built around this prison by Paul Kruger from 1896 to 1899 to protect the South African Republic from the threat of British invasion.

Winston Churchill was held at the Old Fort briefly when he was a young war correspondent.

The Old Fort prison was later extended to include \native" cells, called Section 4 (or the infamous Number 4) and Section 5, and, in 1907, a women's section was added. An awaiting-trial block was constructed in the 1920s. Both political activists opposed to apartheid and common criminals were held at the prison. Mahatma Gandhi was imprisoned here in 1906, and striking white mineworkers in 1907, 1913 and 1922.

Under the apartheid government, only whites were held in the Old Fort itself, except for Nelson Mandela, who was given a bed in the hospital section when he was as an awaiting-trial prisoner in 1962 prior to the Rivonia Trial. Joe Slovo, Bram Fischer, Albert Luthuli and Robert Sobukwe were also inmates.

The site housed prisoners until 1983 when it was closed.

The new Constitutional Court building was built using bricks from the demolished awaiting-trial wing of the former prison. The court building is open to the public who want to attend hearings or view the art gallery in the court atrium. The court houses a collection of more than 200 contemporary artworks chosen by Constitutional Court judge Albie Sachs, including works by Gerard Sekoto, William Kentridge, and Cecil Skotnes.